My mother was a wonderful and enthusiastic quilter.
She's been gone for a few years now but I still have her quilts
and my memories and photographs!!
Here's a photo of her with a Christmas tree skirt
she made a couple of years before she died.
She made it for the fiancée (now wife) of her favourite grandson. 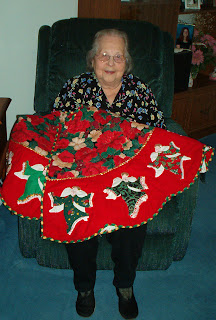 This is the complete tree skirt.
You can see there's a slit to make it easy to place around the tree stand
or I suppose, you could just lay it flat and stand the tree on top of it. 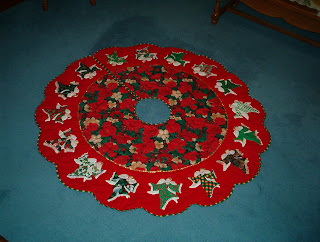 Here's a detail. She appliquéed a ring of dancing angels around the outside.
This is the motif you can find in the free patterns listed on the right side of this blog. 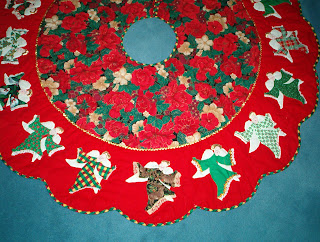 To make the template, cut a square of last night's newspaper,
the same size across as the diameter of the skirt you have in mind.
Fold it to make wedges (like cutting a pie).
The number you need will depend on how big your circle is.
You'll want each wedge to be big enough for an angel.
Mom's had 16 wedges with angels. While the newspaper is folded up in wedges,
you can make a graceful arc to get the outside circular shape.
Hers has a scalloped edge as you can see.
I hope you'll enjoy making her Christmas tree skirt
and I hope it gives you as much joy as it did her....and me.
Posted by Cheryl Coville at 9:42 AM 11 comments: 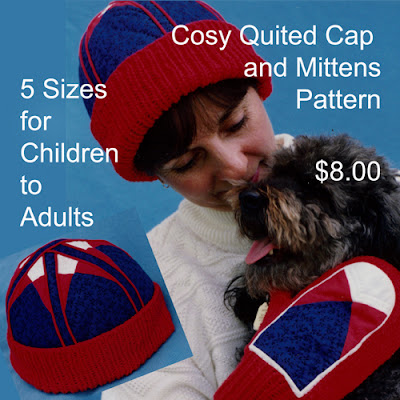 When you combine quilting with knitting everybody wins. This cap and mittens set is warm and elegant.  The cap pattern includes 5 sizes to fit Child Size 4 (19in.) to Adult Large (24in.). The mitten pattern includes 5 sizes as well to fit children to adults. Both patterns include full-size templates and complete illustrated instructions. The patterns come as a set for $8. They are delivered to your email box as .PDF attachments. Paypal accepted. Email me at: grandmacocosdesigns (at) gmail (dot) com to order. 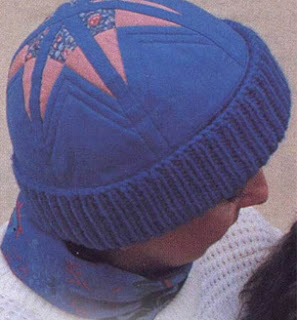 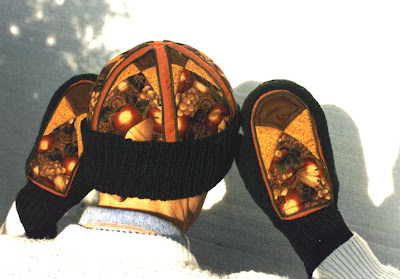 Posted by Cheryl Coville at 1:00 PM No comments: 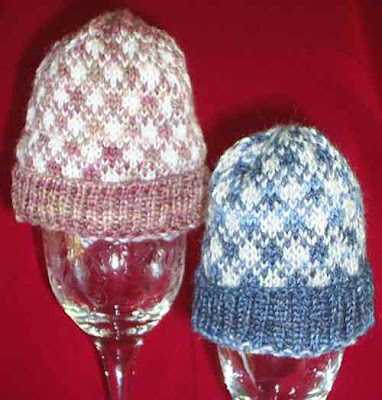 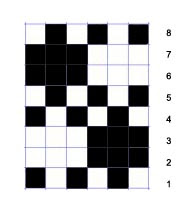 Chart
6 stitch/8 rnd repeat
Knitted in the round.

Coco's Cap is designed to use up odds and ends of sock yarn to make caps for preemies and newborns. It came from a challenge from The Knitmore Girls to design caps for the Head to Toe Design Contest. It was a PRIZEWINNER!!

This plaid stitch pattern is a traditional double knitting pattern used for mittens here in Canada (mostly in the Maritimes) and in the northeastern United States. The double knitting makes for an extremely warm garment and I have used this pattern in socks as well. In Robin Hansen and Janetta Dexter’s excellent book “Flying Geese & Partridge Feet” this stitch pattern is called Chipman’s Block.
Designed for leftover sock yarn (fingering weight), my blue and grey preemie cap is made with 6 gr. of Trekking ProNatura (blue) and 4 gr. of Phildar Preface (grey). My pink and white newborn size cap is made of 9 gr. Fearless Fibers 100% Superwash Merino wool (pink) and 5 gr. Kroy sock yarn (white). The preemie hat is about 7 inches in circumference (unstretched) and the newborn size is about 10 inches in circumference (unstretched).
Chipman’s Block Stitch Pattern Written Out: