All that's left of 2014 is the big finale. And to that end, we've got the Chex Party Mix in the oven. Yes. That's how old we are. We make Chex Party Mix, which we learned when we searched online for the recipe 'has been a family favourite for over 50 years'. Sigh.

Posted by Cheryl Coville at 9:52 AM 2 comments:

Email ThisBlogThis!Share to TwitterShare to FacebookShare to Pinterest
Labels: Cassie

My friend Kate recently got a new puppy, and what a pup he is!! Here's the picture she took of him. 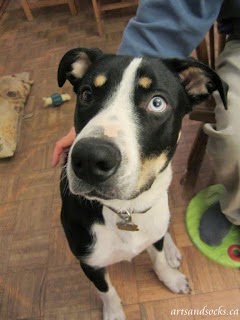 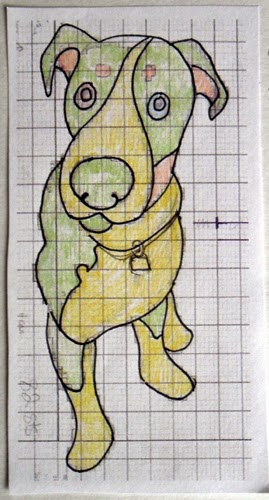 At first, I thought he might like to be knitted into a sock in an intarsia design. Never mind that I've never done intarsia. I figured it'd be a chance to learn. Here's the chart I made for that.

When I had about a dozen tiny skeins of yarn all flipping around my knitting, I decided (as usual) I'd started too big. Simplify! Simplify! (When will I learn?)

Back to the drawing board. With the new direction that felt appliqué took me, I thought maybe what Doug really wanted to be was a mitten.


Yes. I really think Doug wanted to be a mitten after all. 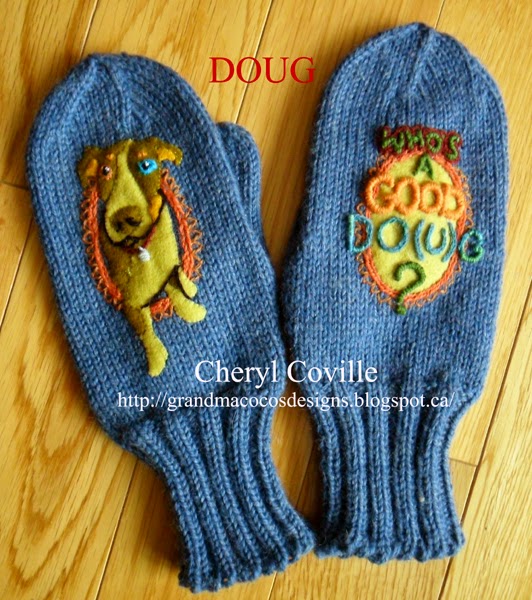 Cats at the window 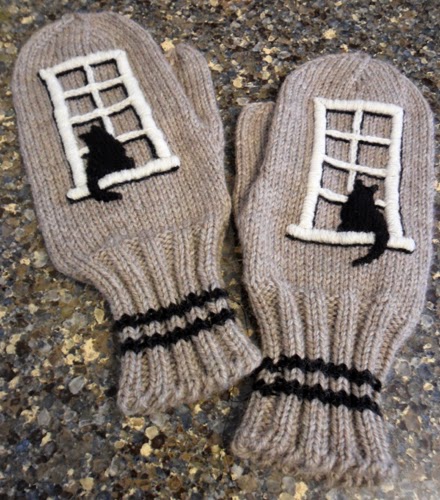 Inspired by a photo taken by my friend Stephanie Etherington.  See the original here: http://villagecats.com/ 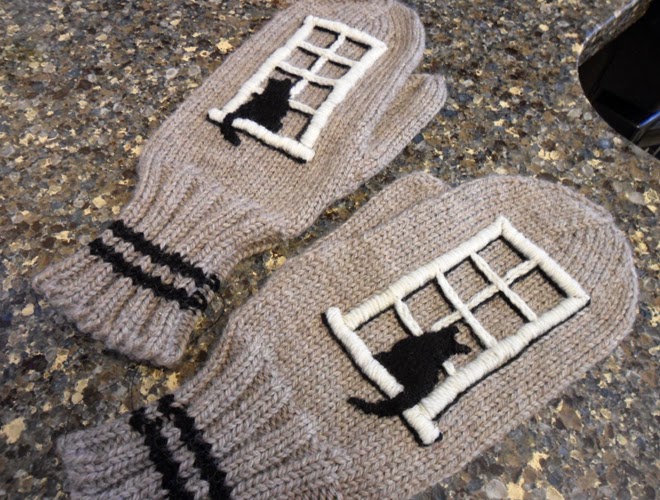 She gave me permission to interpret her photo in wool embroidery. Needless to say, I love the photo. I think the mittens turned out well, too.
Posted by Cheryl Coville at 4:38 PM 3 comments:

I like to think that even monkeys like to keep warm. And I'm sure they think about fashion, too. 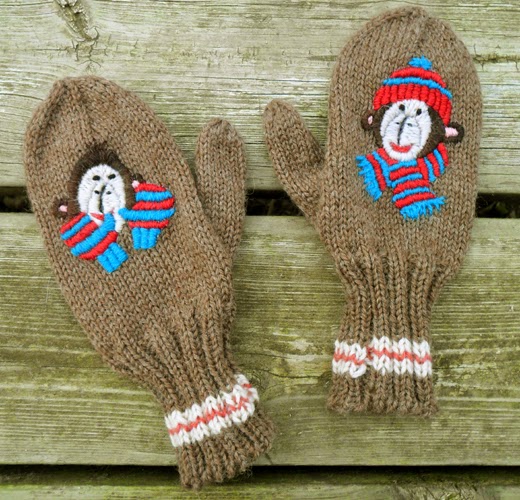 These mittens fit me snugly, but my hands are small. My hand is 6 1/4 inches from tip of longest finger to the base where my wrist starts, and about 7 inches around. The ribbed cuff is 3 1/4 inches to keep the snow and cold out. They are 100% wool.

Since these mittens currently have no home, if anyone would like to adopt a pair of monkey mitts, they can be had for a minimum donation of, say, $25. (postage included) to The Lyndhurst Feral Cat Project. Cheque or Paypal, just leave a comment, or email me directly at covillewood (at) gmail (dot) com , and we'll work out the details. 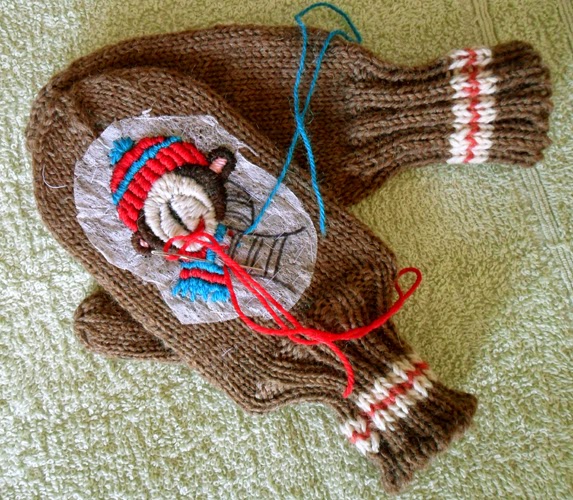 And a hat for her 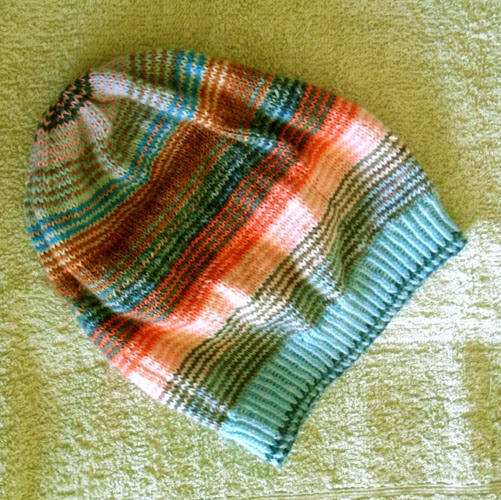 A lovely slouchy hat which I will actually wear, because it fits and it looks OK. Not OK enough for me to model here, but OK enough to go to the grocery store, if you know what I mean. Actually, the last time I was in my local Starbucks, it was a cool and drizzly day. There were 2 young women there in slouchy hats. They looked lovely. I concluded that slouchy hats were actually in style. This might be one of those rare instances where I collide with fashion.

Here is the original pattern. The Sock Stashbuster Slouchy Hat by Amanda Schwabe. She has a nice take on the stripes.

Of course, I have to show you the finished 1898 Hat that I made for Mr. Coco. 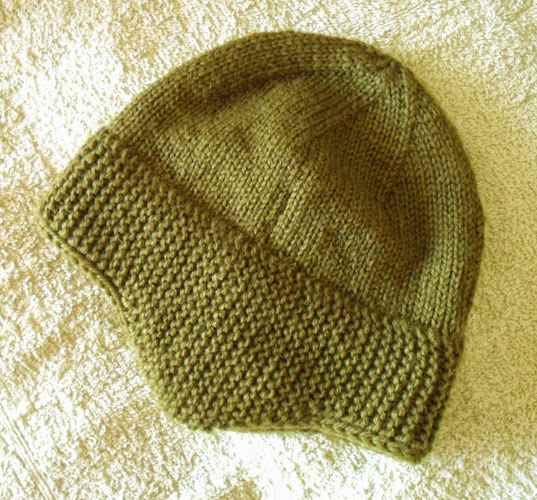 He loves it. It's warm and it stays put on his head. All the other hats he had would move around. When he lifted his shovel, the hat would slide forward and cover his eyes. He'd have to slide it back. Not sure if it was the fit or the fibre. This one is 100% wool, worsted weight. The pattern advises not to block, but I blocked the dome of it, because it had a curiously pointy gnome-like quality that wasn't really appealing. It blocked out just fine. 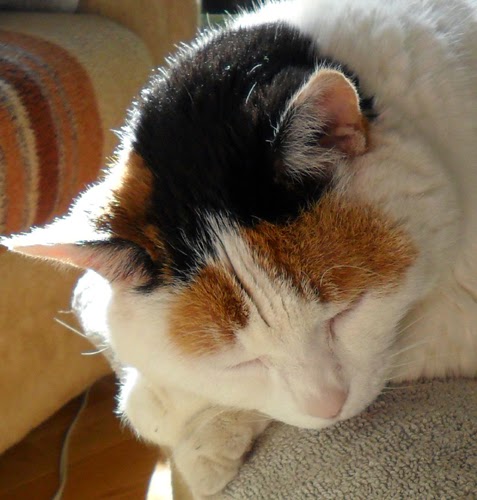 And, of course, I've gone far too long her without a photo of the lovely Miss Cassie. She was a bit under the weather for a while, but after a quick (and expensive) trip to the vet, she's fit as a fiddle again. Fourteen years old now, and still a beauty.
Posted by Cheryl Coville at 12:57 PM 2 comments: