So, how's the knitting theme quilt coming along?

Grandma Coco has been stitchin' up a storm. Let's see....where did we leave off? Oh, yeah, the last time we checked in, the sweater gift tag was getting its outline stitching on the text. We learned an awful lot on that one (and we use the word 'awful' on purpose). Free motion embroidery is some tricky stuff (as Thelma once said). We've decided we prefer to keep our feed dogs up! It means we need to work on a slightly larger scale. Good to know. In the interest of full disclosure, some of the embroidery (the cat's face, for instance) was done by hand.

﻿﻿ ﻿﻿
Then, we set to work on the Need New Socks gift tag/band. (You probably saw that one coming, didn't you?) This one's about 12 inches x 18 inches. The text is larger and much easier to handle. Although we liked the Lite Steam-a-Seam 2 for fusing the pieces of the Sweater gift tag (much better than WonderUnder, in our opinion) it still gives a stiffness that we don't really like. And if you have to do much layering, that stiffness becomes a real problem. We tried trimming the fusible so it was only under the very edges, but that was a lot of work. For NNSocks, we used the old stand by freezer paper and a narrow zigzag with invisible thread. That works very well. This one will get some additional embroidery detail.


﻿ ﻿
And then we tried a different approach, just for the fun of it. This is the Froggie Rip-it! block. (For all you non-knitters, that's not a typo. The frog says "Ribbit, ribbit" which sounds to a knitter like "Rip it! Rip it!" and that's what you have to do when you make a knitting mistake. So, knitters talk about "frogging" a project or "sending it to the frog pond" if it has to be ripped back. Right, so we've got that out of the way!) 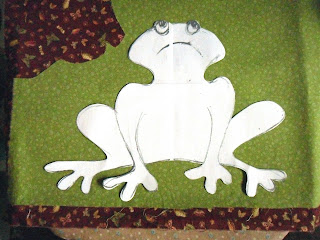 With the appliqué fabric right on top of the background fabric, we traced the outline of our frog. Then we stitched through both layers of fabric (with freezer paper stuck to the bottom for stability). We used a very short stitch. Next we trimmed the top fabric as close as we could to the the outside of the stitching line. Then we did a zig-zag, sorta satin stitch with rayon thread all over that raw edge.


﻿ ﻿
It's easy. It's quick. And it's fun. Did we mention that we're calling this our Franken Quilt? It's kind of a surgical assemblage of all sorts of motifs and blocks in a very spontaneous approach. We hope it won't frighten the villagers!

We made some Wonky Stars that Elaine (from the Maple Leaf Quilt Guild) pointed us to, and overlapped them over a pieced strip that was partly stitch-and-flipped and partly over-laid spontaneous appliqué. 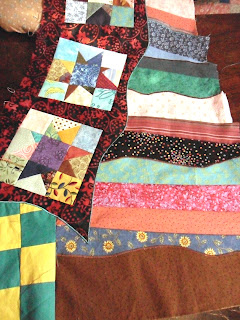 This piece will be the lower right hand corner of the quilt. We also have some orphan blocks that are good colours for this quilt. We haven't had this much fun in a long time.
Posted by Cheryl Coville at 2:10 PM