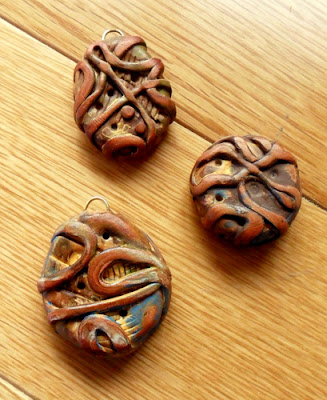 We've been collecting polymer clay supplies and tools for a while now. It's hard to just get started. Finally, we realized we needed a bit more guidance. Since we don't have any teachers or classes nearby, we bought a tutorial.... Rustic Beads and Components from Polymer Clay by Ginger Davis Allman from The Blue Bottle Tree. The tutorial is great. Very well written. However, we didn't have one of the tools she suggested, so we substituted another technique. This means the beads don't look much like the ones in the tutorial. However, since we were looking for a jumping off point, we got exactly what we were hoping for. A good teacher ought to show you how to do something, but more importantly, s/he ought to give you the creative boost to go in other directions. Ginger Davis Allman succeeds admirably at doing both.

Our beads are big..... an inch and a quarter long, or so. Two of them have embedded metal loops. The round one has a hole through the centre for stringing. We love that they changed from step to step, and we had no idea where they'd end up. We think they're like digital photos. We need to make a whole bunch of them and keep only the very best. But then again, isn't all art like that? You just keep playing, and you only show your very best efforts.