Sometimes I am slow on the up-take. I admit that freely. The subject of today's post is one of those times. I just discovered fondant which is really just Adult Play-Doh.  More than that, I just discovered that you can make your own marshmallow fondant that is pretty darned tasty. And furthermore, if you discover that your Play-Doh modeling skills are a little rusty, you can just melt those marshmallow fondant sculptures in a nice hot cup of cocoa.

Never mind that it's HOT here in the Kingdom today, with very high humidity. Not really hot cocoa weather, but I tried to ignore the heat by sitting in the breeze from the fan and playing with the fondant, with no one to scold me if I blended the colours. 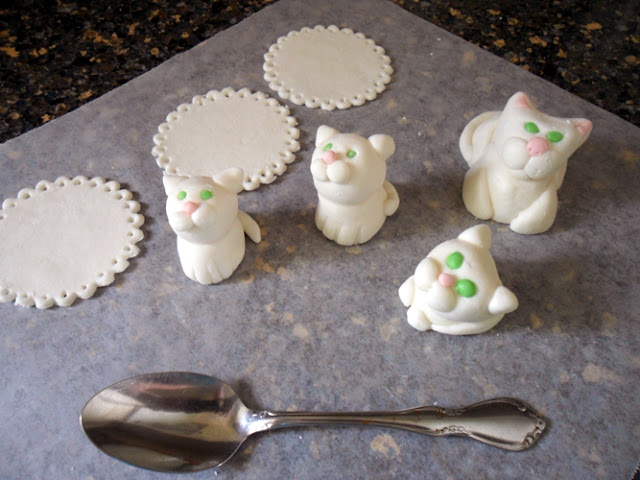 Cats!! I left the teaspoon in the photo, so you could get an idea of the scale. These cats are intended for the tops of cupcakes. I was going to bake some, but that would involve more heat in the kitchen, and I don't really need the calories anyway.

In the end, I decided anybody who reads this blog probably has a pretty good imagination. Just imagine these on a cupcake. Except maybe for the extra big one. He was the first one, and he got a little out of hand. Imagine him on a cake. His very own cake.

As for the Smiley Sweater..... I've added beads to the 'Say, "Cheese!" ' text and I'm continuing with the mouse. Hot and humid is not really a great combination for a wool sweater, but it's hard to put down. 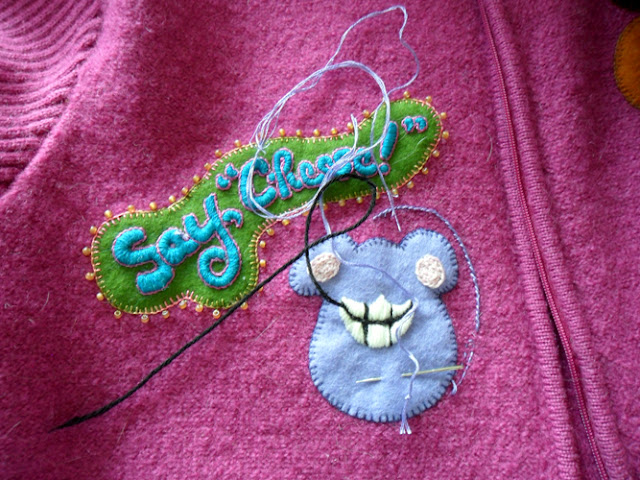 Posted by Cheryl Coville at 3:45 PM