According to the WWF (World Wildlife Fund) today is Sweater Day when we’re encouraged to turn down our thermostats by 3 degrees and put on a sweater. Remember what Brenda Dayne says when she ends an episode of her podcast, Cast-on?  “If you’re cold, put on a sweater. That’s what they’re for.” And right she is. It’s so easy to just crank up the thermostat … but so environmentally irresponsible at the same time.
Some of my favourite sweaters can be found in books. Roch Carrier’s  The Hockey Sweater comes to mind. It’s an autobiographical account from his childhood. When he outgrew his old Canadiens hockey sweater his mother ordered him a new one from the Eaton’s catalogue but when it came it was a Toronto Maple Leafs sweater. Horrors! For me, the story always reads in Rock Carrier’s own voice because the first time I heard the story was when he read it on Morningside on the CBC radio. In the good old days. When Peter Gzowski was still alive. And not yet maligned.
The other book I cherish is one I found by chance in a second-hand book shop. It’s  another Canadian book…..Amos’s Sweater by Janet Lunn with illustrations by Kim LaFave.
The first line says it all “Amos was old and Amos was cold and Amos was tired of giving away all his wool.” (Amos is a sheep, of course.) I love, love, love the illustrations with all the sheep and the knitting. And I love the story with its undercurrent of concern for animal welfare AND a happy ending. Written in 1988, it won the Amelia Frances Howard-Gibbon Award for Illustration, the Canadian Booksellers’ Association’s Ruth Schwartz Award and the Governor General’s Award for Illustration. Amos’s Sweater would make an excellent gift for any child…even 23 years later.
In honour of the day, that persistent sweater drawing has morphed once more. Now it’s a gift tag. It's meant to accompany the gift of a sweater (hand knit, of course) and has a place on the back for laundering instructions. 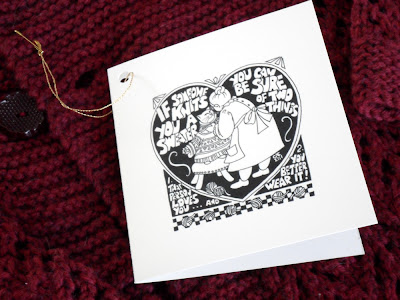 Happy Sweater Day!
Posted by Cheryl Coville at 9:00 AM