WIP Wednesday: We did it our way!

We saw the cutest project on Sew-Sisters' blog.  It's a play mat from Moda Bakeshop. A Cathedral Window look-alike. Really, really cute! But you know Grandma Coco. She always has to do things her way. 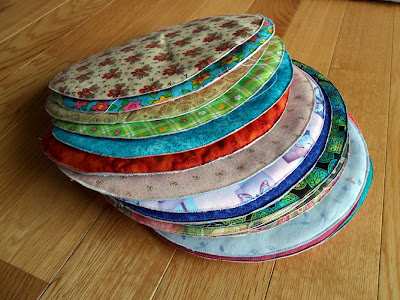 First of all, we would never, never, never....in a million years, never!....cut 40 circles of fabric and 20 circles of batting and then try to sew them all together. Not gonna happen. That would be way too fussy. Nah, what we did was mark a circle on the right side of one piece of fabric. (We traced around a metal pie plate.) We layered this with batting and a 2nd fabric, stitched all around and then trimmed close to the stitching line. We ended up with a stack of 20 disks that didn't need to be turned inside out (which would have been a colossal pain).


The Moda Bakeshop tutorial blithely says that you should make a template of a square that fits on the circle where each point just touches the edge, in order to mark the lines which join the squares together. The designer does say that our square may not be the same size as hers because it depends on the size of the circle you started with and the width of the seam allowance, etc. However, she doesn't say exactly how to accomplish this particular bit of geometric wizardry. We scratched our head over this one for a while and then we figured it out. Measure the exact diameter of your circle. That's the diagonal of your template square. Draw a second line (the length of the diameter of your circle) at right angles to this line, through the mid-point. You have an 'X' where the end points are the 4 points of your square template, each one touching the perimeter of the circle. Join them up and cut out the square. It IS simple. We just couldn't visualize it at first. 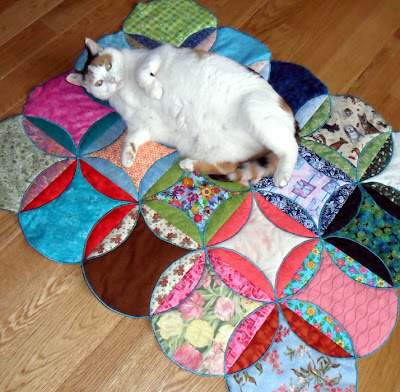 Grandma Coco found it was easiest to mark the squares as we went. We're working with circles so we only really need to mark one side, slap another circle up to it and stitch. (Trying to match a marked line on one circle to the marked line on a second would again be a colossal pain.)

Once we had them all stitched together, we gave the arcs a little press just like the Moda Bakeshop lady said to do and then we riffed on her idea by top-stitching them down with a zig-zag satin stitch, finishing the edges and stitching them in place all at the same time. Cool!

Cassie gives it 4 paws up!!


Since there's been precious little quilting going on here
in the Kingdom of Coco lately,
we're delighted to be able to link today to the
Needle and Thread Network for the WIP Wednesday.
Be sure to hop on over there and see what everyone else is up to.﻿