AND, we're back! To the Corduroy Roads Sock, that is.


Now, where were we? Oh, yes. We'd just turned the heel and reduced at the gusset to finish the foot on the same number of stitches we had for the leg... 60 for the large size OR 54 for the small size.

We're going to do a Round Toe which is our (current) favourite toe treatment. The instructions, in this case, are the same for either size.

Cut the yarn leaving a 10 inch tail and draw the tail through all the remaining stitches. Pull up tight and fasten. Darn in all the ends.

That's it! Thank you for helping us get our second sock completed. They have already been claimed by Mr. Coco (who knows a handsome sock when he sees one.) 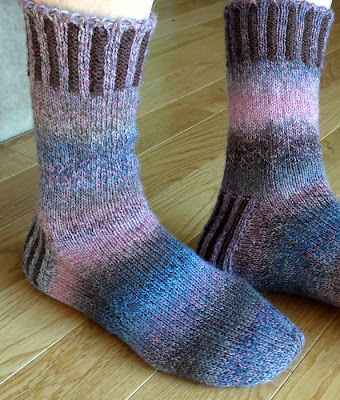 We can't shake the feeling that there's much more to explore on the heel flap of the simple sock.

Posted by Cheryl Coville at 1:44 PM