Spare a tree, save the world CONTEST!

Everyone’s going green these days…and that’s a good thing. More and more people are trying to do their part whether that’s by recycling or re-using or even going paperless altogether. It seems to me the more we can do away with unnecessary paper the better off we’ll be. I don’t know about you but in my studio there’s an awful lot of paper sitting around as magazines and patterns.
The knitting world has been out there in the forefront for a while now eliminating paper  with a couple of successful online magazines like Knitty and Knitchmagazine and Knitcircus.  Lately, even the big knitting magazines are going digital with the option to purchase digital subscriptions.
Ravelry is an extremely successful social networking site for knitters. They recently celebrated their one millionth member! Ravelry not only allows independent designers to sell digital downloads of their designs on its site but has actually provided the platform for those sales. Everybody wins in that equation.
In the quilting world, CQMagazine Online  has been around for a while but its focus is Crazy Quilting only. I used to enjoy Cotton Spice but it seems to have gone now. So, why has the quilting world been so slow to jump on the digital bandwagon?
Are we less tech savvy? Are we older? Less educated? All that seems doubtful.  Is there something about quilting patterns that make them so different from knitting designs? Well, I suppose there’s the fact that quilting patterns often involve templates but  .PDF’s are accurate and traditional quilting magazines are pretty much limited to the same page size as home printers. Why, Burda Sewing Patterns (which by definition are usually larger than 8-1/2” x 11”) are successfully sold by digital download for heaven’s sake … so what gives?
Could it just be that that’s the way it’s always been done?  Well, Grandma Coco says it’s time for a change. Here at Grandma Coco’s Designs we’ve gone completely digital. If you like one of our designs, you don’t have to search for it in the shops or wait for it to come in the mail. Oh, you may have to wait until Grandma Coco wakes up from her nap and gets to her email but that’s never more than a few hours. :) 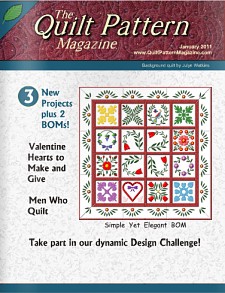 And Grandma Coco is also happy to see that she’s not alone in this digital revolution. There’s a new online quilt magazine about to make its debut.  The Quilt Pattern Magazine  will be an online only ezine. It promises monthly issues with no fewer than 5 patterns per issue and a couple of interesting articles as well. All that for only about a dollar a month! Because that’s the thing, you see, not only is it better for the environment to go digital,  it’s also cheaper. They’ve got a sample preview up HERE so you can see how well it works.
The editors of The Quilt Pattern Magazine have given me a FREE year’s subscription to give to one lucky reader of this blog. If you’d like the chance to win it, just leave me a comment. Tell me what you think about digital downloads (good or bad).  I’ll draw the winner at random at the stroke of midnight on New Year’s Eve and that lucky quilter will be notified during the first week of January 2011.
Just remember that even if you don’t win the year’s subscription, by going digital, we all win.
Posted by Cheryl Coville at 2:00 AM