More fun with our machine

So, we decided to back slowly away from our machine yesterday after the shredding thread episode. Karen and Monika both suggested a different needle. (Sweet of them not to mention the obvious....operator error.) A new needle will be procured later this week.

Today, we loaded our machine up with black rayon on top and fine black bobbin thread for below. We spoke sweetly to him (whatever his name is....he ought to have a name, right?) and started to outline the lettering on our quilt. Now, the text is a big part of our design and our plan is to fuse the words in word-shaped blocks and then define the letters with black outlining. Sounds simple, right?

Yesterday, we were machine embroidering up a storm with the feed dogs up. Things went well until the aforementioned shredding began. Today, we started the same way but we were dismayed to find we were constantly having to stop and pivot. (We hear laughter. Guess you all saw that coming.)

We've read about machine embroidery with the feed dogs down. Seems exotic but Grandma Coco wanted to give it a go. Today's the day. Now, the really clever among us would have taken a few days to practice, we suppose. Not us. It's do or die. We keep reminding ourselves this is a fun piece. It's just for fun. Fun!

Feed dogs down!! Off we go. Not being completely foolhardy, we decided if we just did a letter here and there around the piece, our poor beginning letters would ....oh, we don't know....BLEND IN with the others? as we get better at it? That's the new plan. (Ever notice how plans conceived on the fly tend to have flaws?) 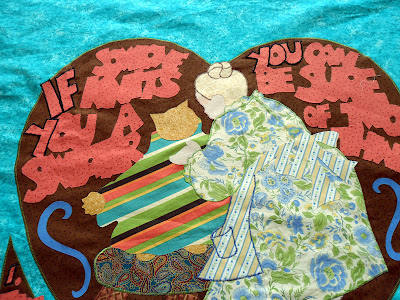 Mom used to say "That mistake will never be seen by someone gallopping by on a horse" (or something similar. Maybe there was something about a blind man in there, too. We forget.). Good enough for us, we say! Besides, we used Monika's secret weapon .  (Thanks, Monika!) We're sure we're only going to get better from here on in. After all, we surely can't get worse.
Posted by Cheryl Coville at 1:28 PM