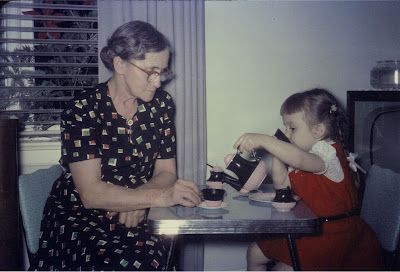 Here’s a photo of Grandma Coco when she was a little girl having afternoon tea with her grandmother….Nelly. We only have a couple of pictures of our grandmother. She seemed old and not very approachable to us way back then but she had had a hard life. Born in 1889, she delivered her first child (our mother) during the devastating flu outbreak of 1918 and was left a widow at only 49 years of age. She had a dairy farm to manage and 2 young girls to raise and by all accounts, she just carried on. We did the math and figure she’s in her early 70’s in this photo. Not long after this photo was taken, she began her long, sad dance with Alzheimer’s. Or maybe she’d already begun. You see she isn’t wearing her wedding ring? One of the things I do remember about her is the constant losing (and finding) of that wedding band. She lived well into her 90’s ... a pathetic, shrieking parody of a woman lost to a terrible disease. Those are our genes.
Grandma Coco inherited Nelly’s treadle sewing machine. We've always intended to get it up and running but more as a conversation piece than as a useable sewing machine. It seemed like a big job. A big job that just might need an expert to tackle it. So it lived at the back of our sewing room closet for….oh, maybe the last 20 years or so.
And then, 2 things happened at pretty much the same time. Two random events, miles apart. And wham! Something great shifted in the cosmos and the light shone through. Grandma Coco ‘met’ 2 people online. (And they say the internet is full of weirdos and scary guys! Nah!)
Grandma Coco met Jeane from Saskatchewan of Samantha’s House who told her she used (actually USED!) her antique treadle sewing machine to do free motion quilting. And she met Terri  from New Hampshire of Purple Moose Designs who not only uses a treadle machine but is really keen (and persuasive!) about everybody resurrecting and using their own old treadle sewing machines.
We dug our treadle out of the closet and set out to see what we had. Terri directed us to some online sites and we were able to find out from the dating service at http://www.singerco.com/ that our machine is a Singer Improved Family Machine and was manufactured on November 26, 1884. 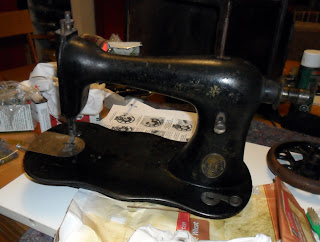 It’s a very cool machine. Everything glides effortlessly. There’s no rust. Nothing’s seized up. We’ve begun the process of cleaning and oiling it. 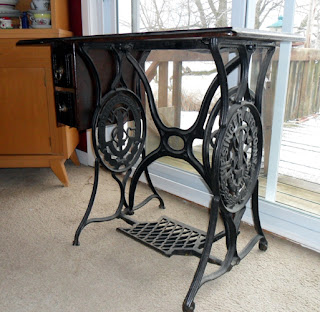 The machine had been removed from the table and at first we thought the belt was broken but it’s not! It has what we think is called a Coffin lid with a lock but we haven’t got a key. We also don’t have any extra feet but we do have 5 very unusual bobbins and 1 original needle which is pretty much identical to a modern Schmetz needle (thank goodness!). The machine has a fiddle base (not rectangular) and has very faint yellow and orange decorative flowers painted on it. 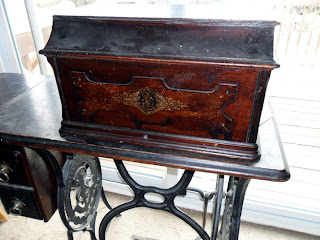 If the machine was manufactured in 1884 and our grandmother was born in 1889, is it possible her mother bought the machine in order to sew for her new family? Or did my grandmother get it second-hand? Or maybe from her husband’s family? We don’t know. All we know is that we are thrilled to feel the connection with a woman we really never got to know. We are calling our machine Nelly in her honour.
If you recognize this model of Singer or have any additional information you could share, please email us.
Posted by Cheryl Coville at 1:38 PM