Cassie's getting a late start. Note all her toys strewn around her. She stays up half the night carting them around....and wailing. Why does she wail? If anyone knows, please do share. She is a happy kitty. She has food and toys and lots of love. She is a mystery. A beautiful mystery. 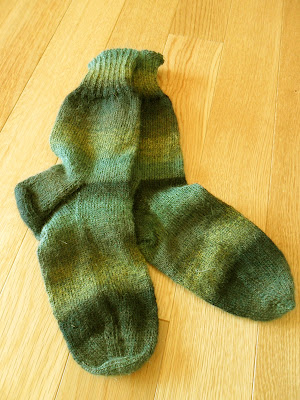 These are the green socks. Finished. That's really not the amazing part....contrary to what some might think. Look closely. They are mates. True (pretty near!) identical mates. Amazing! We started with one single ball of Lang Jawoll Magic Superwash. It weighed 98 grm (with the label) when we started. We knitted and weighed (obsessively) because we wanted to use as much of the yarn as possible (if you remember), making the sock legs as long as we could WITHOUT (and we can't stress this enough) having to rip the first sock back because we ran short on the second sock.

You all know how much we like math. No joke. We weighed and we calculated how much yarn we used as we went along. We have notes like: 84 gr. left, 5 inches from beginning. We thought we had it calculated pretty well and in the end...... Success! We had very little wool left.

However.....it is a complete and total, mind-boggling FLUKE! that these 2 socks are so similar..... especially when you consider how long the colour repeats are in this wool. We doubt we'll ever be able to repeat such a performance. We should just retire now. Several claims were made on these socks while they were in production but in the end, they're going to Mr. Coco and they fit him perfectly.

Here's a question for anyone who has knitted with this wool before. Somewhere during the knitting of the ribbing of the second sock we found a loosely tied knot....not a break, just a knot. Is this the manufacturer's indication of the true centre of the skein? It seems to be at the appropriate spot. That would be cool, if it was intentional.

Another one of those Razzle-Dazzle what is this? puzzles????? 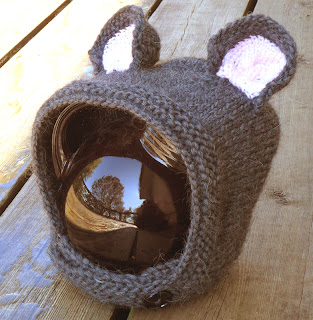 No, this is our version of this from Stitch Nation Yarn.

Aren't they just the sweetest little hats you ever did see?

Unfortunately, we don't have access to a little baby right now and Cassie was sleeping and not inclined to model (but wouldn't that have been adorable?). We do know where to find a cute little baby though. Can't wait to see her in it.

Don't forget tomorrow's Part 4 of the Papa Bear Sampler Scarf Knit-along. There's still lots of time to catch up, if you've been thinking about joining in. We're planning to have a little gift for anyone who completes their scarf and sends us a picture. (Just in case you needed more incentive.) 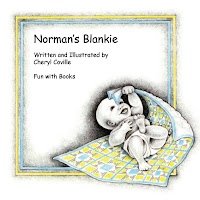 And finally.....don't forget you have until Wednesday to go here and leave a comment to win a copy of Norman's Blankie.
Posted by Cheryl Coville at 11:33 AM