Who knows what these are? Anyone? Anyone? (that's a little Ferris Bueller humour, for those of you old enough to remember). 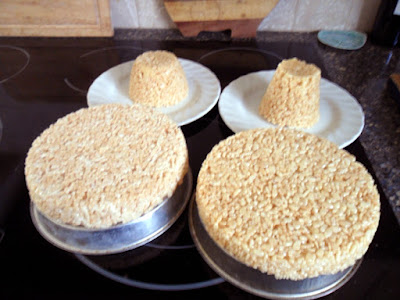 (I was thinking of entitling this post, "Everything in duplication.") I'm making a baby shower cake. Not only have I promised this cake, but I am determined to make a really cute fondant cake topper to crown it with. No matter that I've really never done much with fondant before, except for the cats I modeled this past summer. I just want to. So, I did what I always do. I'm going back to school. I'm following along with a Craftsy course called Too Cute Cake Toppers. And they are. Too cute, that is.

The topper is built on a base. Usually, it's styrofoam, but I couldn't find a styrofoam base, nor could I find the styrofoam form for the bathtub that the bunny is supposed to be bathing in. No biggie. I made my own out of krispie treats. Now, here's a tip for anyone out there who might also be thinking of doing this......leave out the butter. The disk on the right has margerine. The one on the left has no margerine and no butter. The margerine one is flexible. The non-fat one is dense and hard. No human is going to eat this base, so dense and hard is much better than flexible but delicious. You can quote me on that. I'm hoping the toothpicks and skewers that hold things in place will pierce the krispie treat base in the same way as styrofoam. 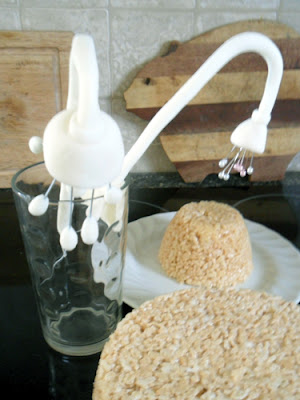 The first order of business is to construct the shower head, because it needs to air dry at least for overnight. I read other people's experiences, and thought I might need a back-up just in case the first one breaks during assembly. They're both OK. For now.

I have 2 weeks to pull this off. I thought it might be good to start early.

When I'm not working on baby shower cake toppers, or consulting Pinterest, or other fondant/cake decorating sites on the internet, or making cookies, you all know I've been working on the Cowichan-style sweater. There's been a lot of internet research involved in that project, too. And some un-knitting and re-knitting. 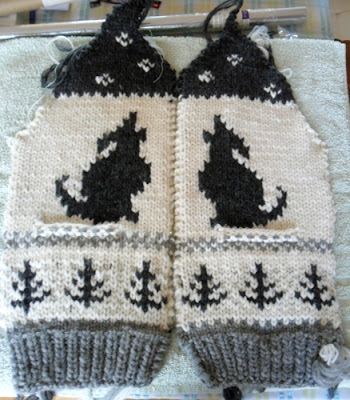 Finally, today, I have both fronts completed. I pinned them out and gave them a little steam blocking, so I could measure for the zipper. It has to come all the way from Winnipeg. There are 2 choices of colour....black or cream. Since they are cheap, and I am confused about what 'cream' could mean, I ordered one of each, and I'll decide once they arrive. I have lots of time. I still have the sleeves to knit, as well as the back which I'm re-knitting for about the 3rd time. That will all be worth it though, I'm sure, because I'm lovin' those howling wolves under the starry sky.
Posted by Cheryl Coville at 12:51 PM