We all know about Grandma Coco's attention span. It's pretty short. She's been making herself crazy with deadlined projects and now that they're completed, she's back on track with many irons in many fires....just the way she likes things.

So, on this particular Wednesday, she's working on the following: 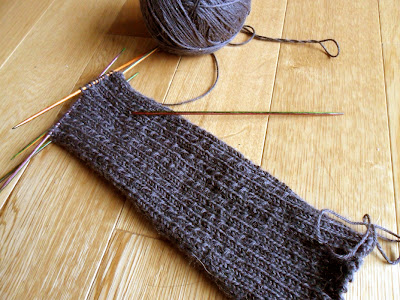 SOCKS! Of course. These are specially made for a very sweet man who went out of his way recently to see that we got to a wonderful yarn store in a city that isn't our home. New socks seem like a small price to pay for such gallantry. The only problem is that he says he has 'hot feet' and, by that, we believe he means his feet feel hot in socks, NOT that, you know, he thinks he has George Clooneyesque feet or anything weird like that. We don't know if he's ever worn a pair of hand knit wool socks before. Maybe he'll just be blown away by the luxury that is in store for him. Maybe not. We're knitting these out of Ariquipa , which is 65% superwash wool, 20% alpaca and 15% nylon. It is soft, soft and the yarn is fine so the socks won't be bulky (which we think might be an issue). We've knit with Ariquipa before and we love it. These socks have lots of stretch. They are ribbed with an alternating twisted stitch that looks like a cable. 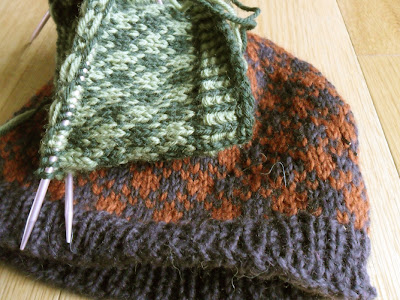 DOUBLE KNITTING!. We're working away on kid- and adult-sized versions of Coco's Cap. Along the way, we got interested in other types of double knitting....corrugated ribbing, for example, and the brioche stitch. It's a long and winding (and exciting!) road we're on. And we haven't got a deadline. :) 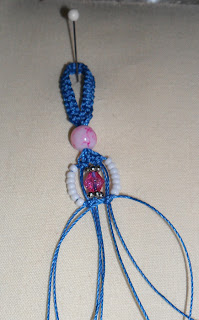 BEADS!!! Another micro macrame beaded bracelet. This one we're just winging. Because it's fun.

POSTCARDS!! We finished some postcards this week for trading but we won't show them because we don't want to spoil the surprise for our recipients but here's one we received in the mail from Pat. Thank you, Pat! Scary stuff!

And that, in a nutshell, is what we're up to on this grey final Wednesday in October. Pop on over to The Needle and Thread Network to see what some other Canadian fibre artists are up to.

Posted by Cheryl Coville at 1:12 PM