The last time I wrote about my attempt to create a square by knitting in the round, if you'll remember, it was to report a total failure. I had an inkling of where I wanted to go, but the rest was pretty fuzzy.

All I want is a simple square that I can embroider and join with other similar squares to make a sweet baby blanket. That's not so much to ask for is it? I want to use Cascade 220 Superwash (worsted weight) with 4.5mm needles. The square needs to be sturdy. And it needs to WANT to be a square.

So, the morning after my last failed experiment, wherein I added extra balanced increases and got 4 extra 'corners' (Yikes! More of a spiky circle, than a square!) I got an email describing an antique mitten. The author wrote that the knitter had increased randomly, so that you could hardly tell where the increases occurred. Well, now. That's a thought, isn't it?

So, with the universe speaking to me so directly, and my tin foil hat pulled down tightly on my head, I set about my next experiment. With the stitches divided on 4 needles, so that each needle represents one side of my would-be square, I increased 1 stitch just inside the first and last stitches of each needle on every other row. PLUS I increased one stitch randomly, at the same time, somewhere in the middle of the stitches of each needle. A total of 3 extra stitches every other row (which is the increase I calculated last time). I used the increase where you pick up the stitch from the row below, because it's almost invisible. So, when I got to Round 28 (which is 4 in. of knitting from the cast-on centre), I had 43 stitches (which measure 8 in., more or less) on each needle.  I had been thinking about 12-inch squares, and then 10-inch squares, but I've finally settled on 8-inch squares, because I think they'll better suit the embroidery I have in mind. I'll just have to make more of them. (Win some/lose some.)

So, here's the square after I steam-blocked it. It still has the blocking wires in the live edge stitches, because I'm still nervous it's not going to work. 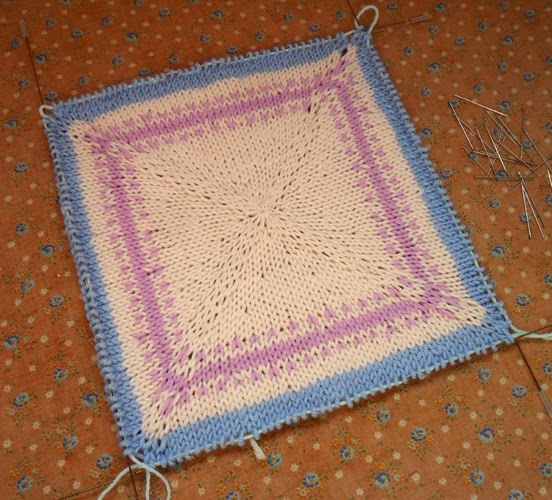 And here it is with the wires removed. Is it not a thing of beauty???!! I flipped it around, and waved it in the breeze, and STILL it wants to be the square it needs to be. I am not worried that the live edge stitches want to curl a little. That will solve itself when it's joined to its neighbour. But the sides are square and true. 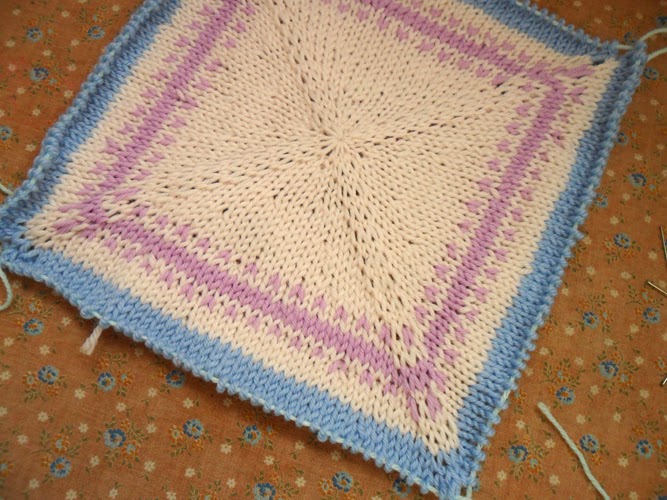 Maybe it's because this was a struggle, or maybe it's because it's a triumph of math for someone who can't even keep a simple phone number in her brain long enough to write it down, but this seems like a massive victory. And I'm smart enough to know this is where  I need to leave the project for today.
Posted by Cheryl Coville at 11:38 AM