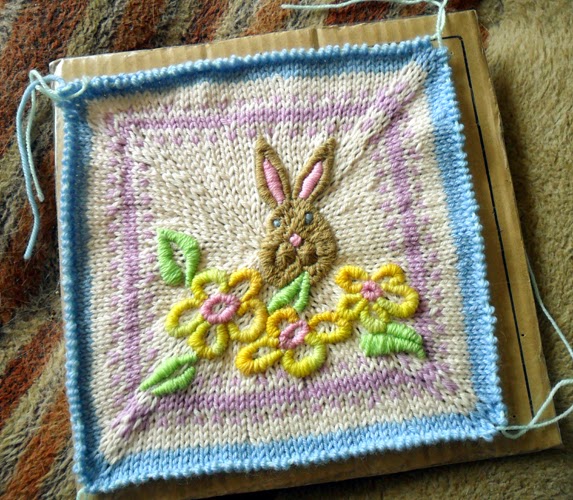 Last night when I finished the embroidery on this block, and liberated it from its clamps, I was disappointed. In spite of that little square being tightly held by the clamps, it was slightly distorted once freed. :(  During the night, I considered my options (when I should have been sleeping). This morning, before I did anything more drastic, I gave it a quick 2nd chance steam blocking, with the square face-down on a thick bath towel. I was pleasantly surprised by the result. I think it's OK. That means Block #1 of 16 is done. I have not yet decided if every block will be embroidered. There have to be a few mysteries left unsolved, or the project will be very dull.

This block shows off one of the reasons I so wanted to knit the squares in the round, in the first place. The purple rounds are done in double knitting, with a little checkerboard effect. Because of the random increases every other round, I can't do the major double knitting patterns I had hoped to do, but the little checkerboards make the block interesting, I think.